H.R.H. Princess Abze Djigma was one of the speakers at the High-Level event as part of the Paris Climate Agreement Signing Ceremony at the UN Headquarters in New York April 2016.

The Paris Agreement was adopted by all 196 Parties to the United Nations Framework Convention on Climate Changeat COP21 in Paris on 12 December 2015. In the agreement, all countries agreed to work to limit global temperature rise to well below 2 degrees Celsius, and given the grave risks, to strive for 1.5 degrees Celsius. Implementation of the Paris Agreement is essential for the achievement of the Sustainable Development Goals, and provides a roadmap for climate actions that will reduce emissions and build climate resilience.

175 countries of the attending countries signed the Agreement this day. 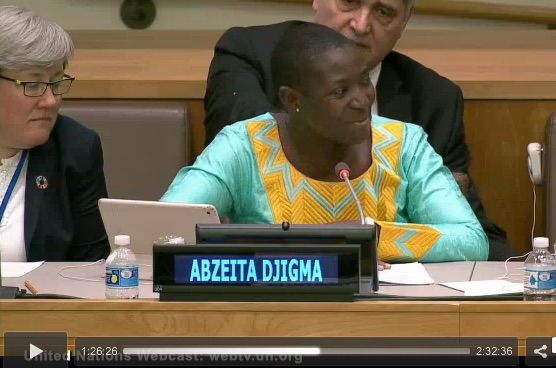 Part of the Signing ceremony was a high-level event that focused on highlighting how all actors of society and economy can accelerate action, learn from each other, and replicate and scale successful initiatives and activities that will deliver the transformative implementation of the landmark Paris Climate Change Agreement and of the 2030 Agenda for Sustainable Development.

H.R.H. Princess Abze Djigma was one of the speakers of this high-level event where she highlighted the expectations and the needs of the bottom of the pyramid and the informal sector. Click on the picture above and go to 1:21:40 to watch her contribution.